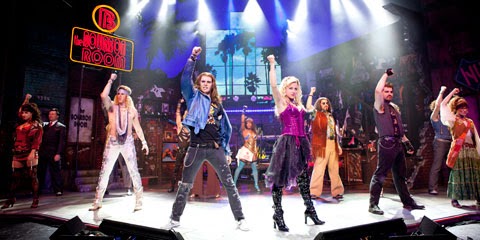 What happens when small town girl and South Detroit boy meet in 1980’s LA?  ROCK OF AGES…as the chemistry between Drew and Sherrie explode, so do the hits from the 80’s..rock to your favorites, “Sister Christian”, “We Built This City”, “Don’t Stop Believin'”, “I Want To Know What Love Is”…

The musical, born from the musings of author Chris D’Arienzo, premiered the summer of 2007 in Los Angeles.  As of January 2014, Rock of Ages is the 33rd longest running show on Broadway.  This year, the NFL has stuck its toe in the musical theatre waters with appearances by several players in the Broadway venue.

All set for a romantic getaway in February?  You’re not?  Why not check out what the 1825 Inn has in store for you…