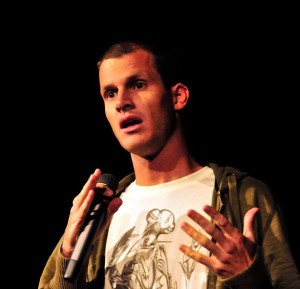 He was born in Boppard, Rhineland-Palatinate..the son of a preacher…and grew up in Titusville, Florida. He graduated from University of Central Florida with a degree in marketing, probably a smart move for the future he never anticipated…selling himself as an unusual comedic wit. He attributes his move to comedy to living in Florida which he jokingly refers to as ” flat, hot and dumb”.

Daniel wears many hats these days…comedian, actor, television host, writer and executive producer…and can be found hosting Comedy Central’s Tosh O. He has appeared with the big guys (David Letterman, Jay Leno, Craig Ferguson, Jimmy Kimmel) on network television, making his debut on The Late Show with David Letterman. He recently shot his fourth television project for MTV Networks and a comedy pilot for Turner Television entitled Short Flix. He unabashedly proclaims stand up comedy his first passion until, as he puts it, “gets a tv show that doesn’t fail”.

Book now at 1825 Inn Bed and Breakfast right next to Hershey PA..have questions about the local area? Ask Will or David for a recommendation.