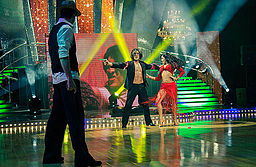 DANCING WITH THE STARS: LIVE!

If you are captivated (another word for obsessed!) by this show, as so many millions are…you may not want to let this opportunity pass you by! Where else can you watch as singers, actors, Olympic champions and even astronauts pair up with some of the most talented professional dancers from around the world..

For the first time since 2007, the show is returning to Hershey. This go round, the show will be hosted by Dancing With The Stars All-Stars winner, Melissa Rycroft. Dancing With The Stars: Live! ‘Perfect Ten Tour’ will  feature pro dancers Valentin Chmerkovskiy, Witney Carson, Artem Chigvintsev, Emma Slater and Peta Murgatroyd along with troupe dancers Sasha Farber, Jenna Johnson, Alan Berstan and Brittany Cherry. June 2, 2015 it was announced Rumer Willis will be joining the show in 25 cities on the tour….and the Hershey show is one of them!

Produced by Faculty Productions in association with BBC Worldwide, the artists will dance their way through 90 minutes of romance and excitement, adding choreography never before seen on the show and bringing some of Dancing With The Stars most memorable numbers to the live stage.

By Danelia.ekaterine (Own work) [CC BY-SA 3.0 (http://creativecommons.org/licenses/by-sa/3.0)], via Wikimedia Commons