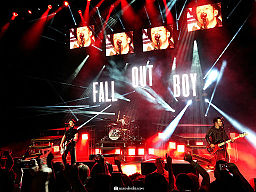 THE BOYS OF ZUMMER TOUR

July 3rd promises to be one heck of a concert night in Chocolate town when Fall Out Boy and Wiz Khalifa share the stage..joining them will be Hoodie Allen and DJ Drama. Expect to hear tracks from their latest albums…Fall Out Boy’s American Beauty/American Psycho and Wiz’ Blacc Hollywood.

Fall Out had its start in 2001 in a village outside of Chicago. The group’s first album, Take This To Your Grave, in 2003 became an underground favorite and gave them the boost to start touring. Since that time the group has sold six albums and has had multi-platinum hits.

Rapper and singer-songwriter Khalifa, released his debut album, Show and Prove, in 2006 and signed with Warner Brothers the following year. He has continued to release multiple albums and won Billboard’s Top New Artist of the Year in 2012.

Book now at 1825 Inn Bed and Breakfast right next to Hershey PA…enjoy one (or more!) of our homemade breakfasts made with you in mind.