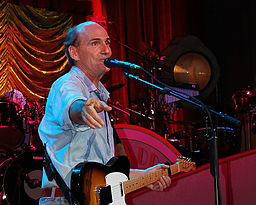 JAMES TAYLOR AND HIS ALL-STAR BAND

James and his All-Star Band are headed our way! Just in time to hear tracks from his newly released album, Before This World. The album, recorded at his home studio in Washington, MA, includes many long time band members…guitarist Michael Landau, percussionist Luis Conte, drummer Steve Gadd, keyboardist Larry Goldings…along with fiddler/vocalist Andrea Zonn and vocalists Kate Markowitz, David Lasley and Arnold McCuller. Close friends of James, Sting and Yo Yo Ma, lent their incredible talents to the project as well. Mr. Taylor’s wife Kim and his son Henry are featured harmonizing on “Angels Of Fenway” and “Wild Mountain Thyme”.

Composing and singing some of the most thought provoking music over the decades, Mr. Taylor has won numerous awards including five Grammies for best pop vocal performance, best pop album and best country collaboration with vocals. He was inducted into both the Rock and Roll Hall af Fame and the Songwriters Hall of Fame in 2000.

For more information about this music icon, more tour dates and what he is doing these days, be sure to visit Jame’s official website

Image  By Paul Keleher [CC BY 2.0 (http://creativecommons.org/licenses/by/2.0)], via Wikimedia Commons

Book now at 1825 Inn Bed and Breakfast right next to Hershey PA…Our gardens are really in full swing. Be sure to take a walk of the grounds during your next stay with us.