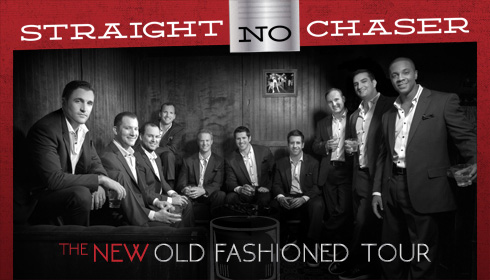 Hershey Theatre is happy to welcome back to its stage the famous a cappella group Straight No Chaser for their 2015 show, The New Old Fashioned Tour (also the title of their newest album release)…

Originating in 1996 at the University of Indiana, their fame skyrocketed with the YouTube video in 2006 of their 1998 version of The Twelve Days of Christmas. The popularity of the group and its video led to a five-album contract with Atlantic Records in 2008. They have managed to reassemble and reemerge as the phenomenal ensemble who tour to packed houses. Widely known for their holiday music performances and albums ( Holiday Spirits, Christmas Cheers), they expanded to include a wide variety of favorites in subsequent albums (Six Pack [EP], Six Pack Vol. 2 [EP], With a Twist and Under the Influence).

To sum up this dynamic singing group, original member Randy Stine has said, “We take the music very seriously; we just don’t take ourselves too seriously.”

Book now at 1825 Inn Bed and Breakfast right next to Hershey PA…the most comfortable beds and softest sheets around!