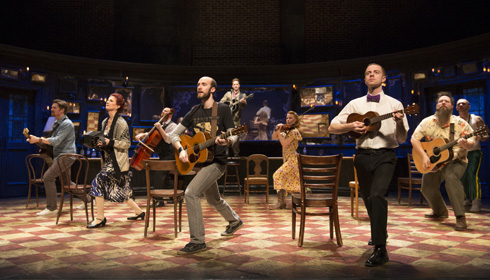 Don’t miss this limited engagement of Once! The musical stage adaptation of the 2007 film of the same name has won eight Tony Awards and a 2013 Grammy Award for Best Musical Theater Album…

The story…an Irish street busker (a Guy) meets a Czechoslovakian immigrant (a Girl). Using a minimalist set and the cast serving as orchestra/musical accompaniment, the story of friendship and love unfolds. The book for the musical was penned by Irish playwright-screenwriter, Enda Walsh (The New Electric Ballroom, Hunger and Penelope)…music and lyrics by Glen Hansard and Marketa Irglova

NOTE: There is a 25-minute hold for late patrons. This means no one will be allowed to enter the theatre or go to their seats for the first 25 minutes of the performance. Patrons are encouraged to arrive early at the theatre. Also, due to some mature language, this show is suited for ages 10 and above.